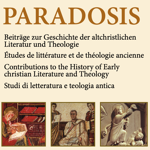 The series "Paradosis. Contributions to the History of Early Christian Literature and Theology" was founded by Othmar Perler, who directed it until 1978 (vol. 1-25). He formulated its basic orientation as follows: “Paradosis is intended as a series of studies in ancient Christian literature and theology. The Greek term, already familiar to the earliest Christian writers, has been adopted as a title since it is convenient for quotation and reference, while at the same time serving to cover contributions in various languages. It implies, furthermore, both a principle and a programme. Christian theology is by its nature rooted in the past. Only in so far as it remains in living contact therewith it is capable of further growth. Hence any study, however unassuming, that throws light on tradition or its sources becomes by the very fact a contribution to the theology of the present.” From 1980 to 1991 (vol. 26-32) Paradosis was published by a committee including Dirk van Damme, Christoph von Schönborn and Otto Wermelinger; from 1992 to 1997 D. van Damme and O. Wermelinger held the editorial office. From 1999 to 2008 O. Wermelinger was the sole editor of the series. Since his retirement in 2009, Franz Mali, Beat Näf (University of Zurich) and Gregor Emmenegger are the editors.